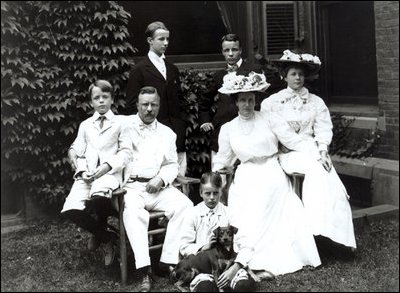 When Theodore and Edith Roosevelt moved into the White House in 1901, they brought six children with them. The crowded living and office space in the White House led President Roosevelt to construct a new office building in 1902. Today, it's called the West Wing. Courtesy The Library of Congress

Traditionally, the spouse of the President served as the hostess and was in charge of all things domestic; but that role has evolved. Beyond defining the role of First Lady, even counting them is difficult as others besides the spouses of the Presidents filled the role of White House hostess, particularly in the 19th century. Widowers, bachelors, and others would call upon surrogates to fill the role when a spouse was unavailable -- a role that itself is a social surrogate for many of the ceremonial functions of the Presidency.

When President George Washington was elected, the public, still steeped in the British culture surrounding royalty and aristocracy, referred to his wife Martha as "Lady Washington" as a sign of respect. This tradition stuck and both Abigail Adams and Dolley Madison were referred to as "Lady Adams" and "Lady Madison" respectively. Since Thomas Jefferson was a widower by the time he was elected, and James Madison was his Secretary of State, Dolley Madison took on the role of White House Hostess when Jefferson’s daughter was not available. When her husband became President, Dolley was able to seamlessly transition into the role of First Lady, as she had already been performing the duties. She was renowned for her excellent dinners and the ability to bring opposing political players together. Because of this, Mrs. Madison is often pointed to as a model spouse, capable of handling the domestic and ceremonial roles of the Presidency while also influencing policy and politics -- all while not overstepping the social and political boundaries of the time. At her funeral in 1848, President Zachary Taylor eulogized her as the "first lady of our land," bringing us a step closer to the current term for the Presidential spouse.

Even at this time, the term “lady” was problematic as it connoted the royal stratification of England that this fledgling democracy had rebelled against. The First Ladies themselves often did not like being called “lady,” even into the 20th and 21st centuries. Jackie Kennedy famously quipped that it sounded like the name of a prized race horse. Other terms, such as “Presidentress” and “Mrs. President” were used early on. Both terms worked when the woman filling the role of White House Hostess was the spouse of the President, but came up short in describing bachelor James Buchanan’s niece, Harriet Lane. To remedy the problem, Leslie’s Illustrated Newspaper used the term “First Lady of the White House” to describe her. This was the first time that the term First Lady was seen in print. The term has stuck ever since. 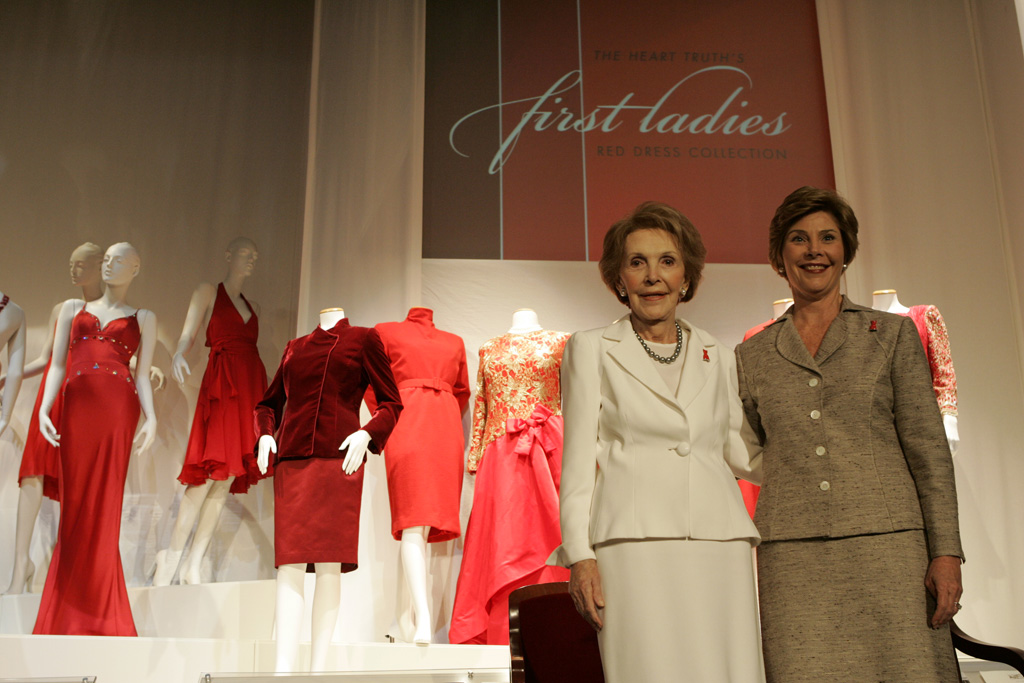 First Ladies were often the most famous women in America, and were able to influence, or at least were perceived to be able to influence, the President. Due to their position and proximity, proponents of causes would implore First Ladies for their aid and assistance, sometimes successful in finding a champion. Harriet Lane took an interest in the needs of Native Americans. Mary Todd Lincoln advocated education, employment, and housing opportunities for freed slaves. Helen Taft inspected unsafe working conditions and used her influence to get health and safety laws passed.

As the role of the First Lady as both an advocate and a ceremonial replacement for the President continued to grow, Edith Roosevelt became the first to have a federally-hired social secretary. Lou Hoover then hired additional secretaries with her own funds, growing the staff of the First Lady. Eleanor Roosevelt was the first to have a personal secretary, in addition to social and administrative secretaries. Jackie Kennedy hired the first press secretary. Soon appointments secretaries, speech writers, and with Rosalyn Carter, a Chief of Staff came on board, filling out a full staff to support the First Ladies’ projects and initiatives, as well as duties she performed on behalf of the President. Like their 19th century counterparts, 20th century First Ladies sponsored national and international causes such as environmentalism, volunteerism, women’s rights, literacy, and treatment for drug dependency. Laura Bush worked to further libraries, education, and the National Parks, while Michelle Obama worked to counter childhood obesity through healthy eating and exercise. Often these causes are interwoven into the ceremonial functions of the White House, such as themed Christmas decorations under Mrs. Bush, or a ‘Let’s Go, Let’s Play, Let’s Move’ Easter Egg Roll under Mrs. Obama. 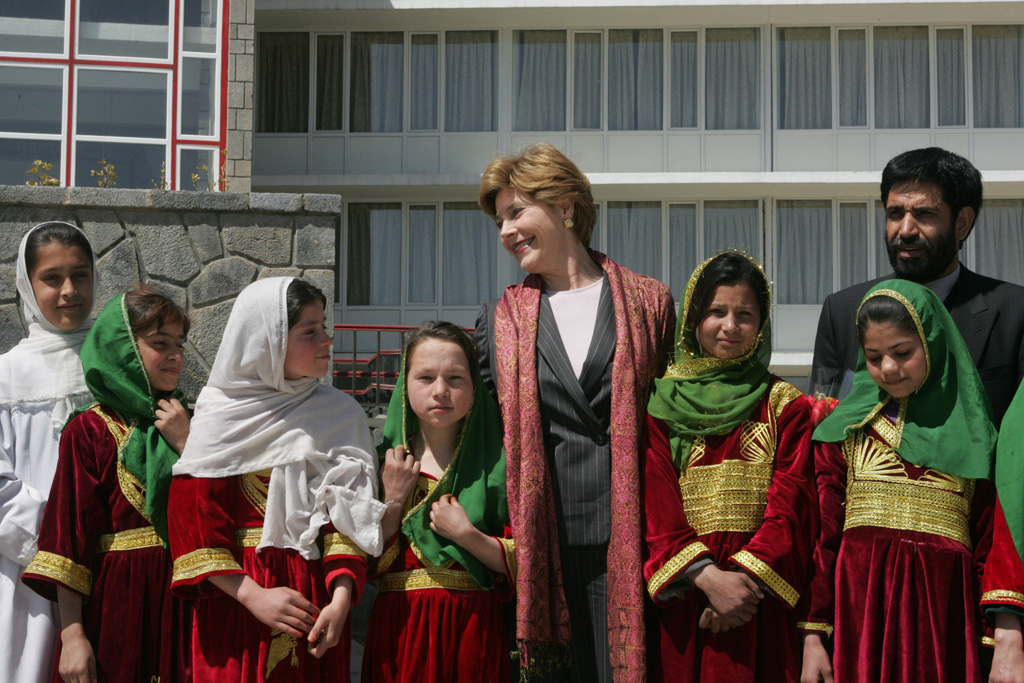 The American public has also been fascinated with the First Ladies as trendsetters in style, fashion, entertaining, and home design. After Frances Folsom Cleveland married President Cleveland in June 1886, women imitated her hairstyle and advertisers used her image to sell products. Mamie Eisenhower was named by the Dress Institute as one of the 12 Best Dressed Women in America in 1952. She was lauded for her use of color coordination and matching accessories, which then began to be imitated across the country. Jackie Kennedy worked to historically preserve the White House and her special tours of the House were televised. She was also considered extremely fashionable and her style is still imitated today. Nancy Reagan was known for her signature color red, which appeared in the White House China service and in her wardrobe.

Inaugural gowns have been a popular fascination spanning the centuries and many are held preserved in the Smithsonian. What a First Lady wore to inauguration often set the tone for that social season in Washington even going back to the 19th century. Over time, the interest in First Ladies has gone beyond the traditionally feminine roles of fashion and home, to include their educational background and what they are reading.

As the personification of American power, the President of the United States and his family face continual scrutiny and criticism. First Ladies have been criticized for doing too much and for not doing enough. Some have been praised for their looks or fashion, and others have been less kindly treated. Each woman has had to make her own rules and define her own role without the guidance or limitations of the Constitution. As it has in the past, this role will continue to change and adapt -- someday, there may even be a “First Gentleman.”

The following carefully selected resources, some of which are from the George W. Bush Presidential Library and Museum, provide further information about the First Lady's role.

For a more complete guide of the archival records that are open for research, please download the Archival Research Guide:

Executive Office of the President