The White House Easter Egg Roll, which begins at one end of Pennsylvania Avenue and continues at the other, is one of the oldest traditions in Presidential history. Rolling eggs on the Monday after Easter was a tradition observed by many Washington D.C. families, including the President's family. Some historians believe Dolley Madison first suggested the idea of having a public egg roll while others tell stories of informal egg rolling parties at the White House dating back to President Abraham Lincoln's time.

Newspaper accounts from as early as 1872 recount stories of children of all ages joining together to roll eggs on the west side of the Capitol grounds. Easter Monday celebrations grew popular in the 1870s. Families and their children apparently caused such a ruckus on the congressional grounds in 1876 that the Turf Protection Law was signed by President Ulysses S. Grant citing landscape concerns and prohibiting the grounds from being used as a playground in future years. The egg rolling party was rained out in 1876 and in 1878 notice was posted that children would not be allowed to roll eggs at the Capitol. There are different versions about what followed, but it is generally believed that President Rutherford B. Hayes, alerted to the children's disappointment, opened the South Lawn. The first official White House Easter Egg roll was held in 1878.

The planning of the White House Easter Egg Roll traditionally falls on First Ladies, each incorporating her own tastes and interests to the event. Through the years, the Egg Rolls have evolved and changed with different games and amusements, including bands, entertainers, and food. John Philip Sousa and "The President's Own" Marine Band performed for an assembled crowd while vendors sold their goods in 1889. Forty years later, First Lady Lou Hoover instituted folk and maypole dances. At her first Egg Roll in 1933, First Lady Eleanor Roosevelt greeted visitors in person and, for the first time, over the radio. She also introduced more organized games. Yet, it was not until 1974 when the most famous game, the egg rolling race, was introduced with spoons borrowed from the White House kitchen. Subsequent celebrations have included a circus, petting zoo, exhibits of antique cars, Broadway shows, and giant balloons.

Presidents and their families have long enjoyed the White House's largest public celebration and it has been customary for the First Family, including grandchildren and pets, to attend the event. Among the most anticipated guests each year is the White House Easter Bunny. The Easter Bunny, usually a White House staffer dressed in special rabbit suit, was introduced by First Lady Pat Nixon in 1969. Strict guidelines prohibit the Easter Bunny from being seen without his costume head, but the identity of the staffer inside has been occasionally revealed.

The White House Easter Egg Roll has been cancelled either due to inclement weather or in times of crisis.  Because of World War I and World War II, there were no egg rolls from 1917 to 1920 and from 1943 to 1945. Food conservation and then construction on the White House prevented any celebrations from 1946 to 1952. Also, the Egg Roll has been relocated to other sites at times, such as the National Zoo or even back at the Capitol grounds. President Dwight D. Eisenhower reintroduced the Egg Roll on the White House lawn in 1953. For the first time in recent history, the 2020 Egg Roll was cancelled in response to the COVID-19 pandemic.

Egg hunt pits were introduced in 1981 where children searched straw pits for autographed wooden eggs. The custom to receive a wooden Easter Egg that donned the signature of the President and First Lady was an idea instituted by First Lady Nancy Reagan and it quickly became a keepsake cherished by guests. 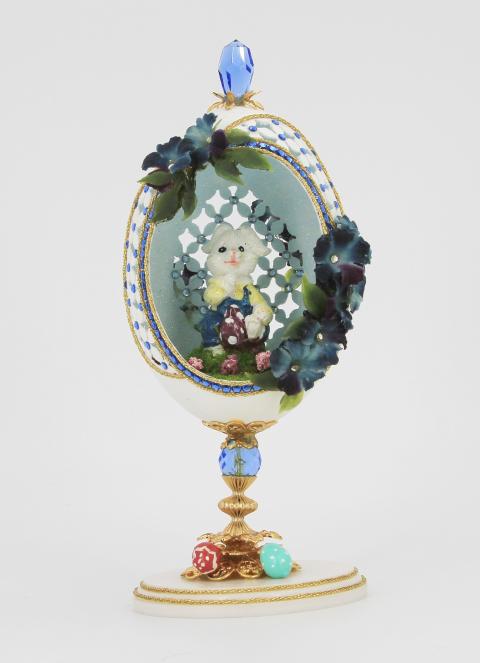 Green, white, and blue hand carved egg with an Easter bunny inside and affixed with rhinestones, miniature eggs, and flowers; atop a 2" gold-tone and white corian stand. Every year, starting in 1977, a decorative egg is presented to the First Lady by the American Egg Board on behalf of American egg farmers. This egg was presented to Mrs. Laura Bush in 2005. (DO.451863)

The following carefully selected resources, some of which are from the George W. Bush Presidential Library and Museum, provide further information about the White House Easter Egg Roll.

This digitized collection (boxes 4, 5, and 6) contains mainly thank you letters to all involved with the annual White House Easter Egg Roll, including volunteers, readers, entertainers, and sponsors.