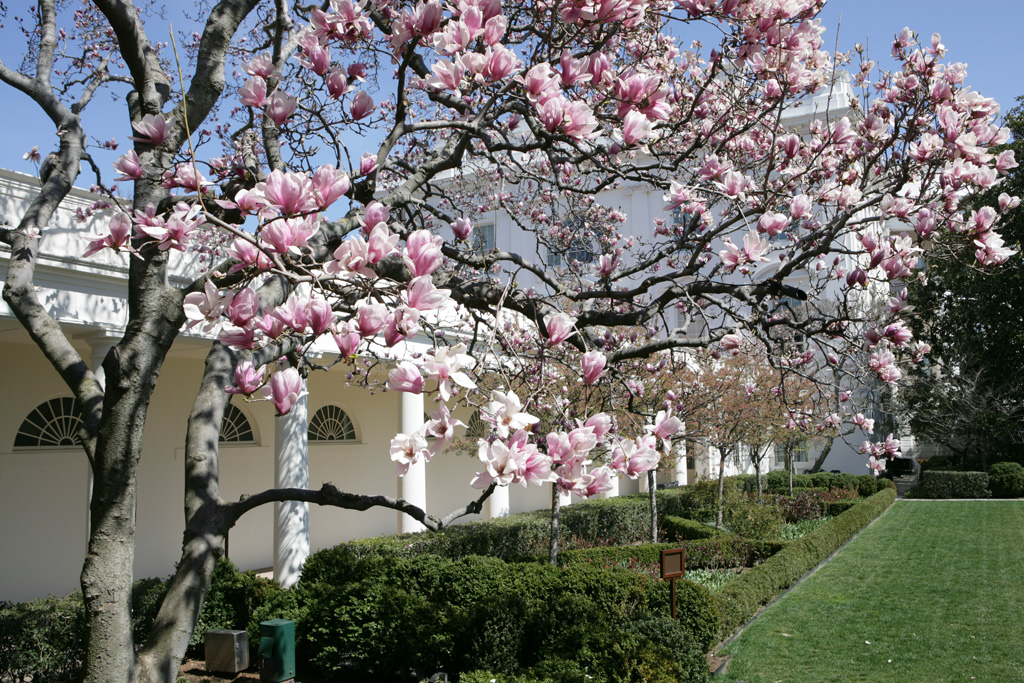 The White House is more than just a beautiful building. For more than 200 years, it has been both the home and the office for the Commander in Chief of the United States and a symbol of our democracy. The only private residence of a Head of State open free of charge to the public, the White House is also the people’s house. The building and grounds are open for tours and its press areas broadcast news to the world. The White House has also served as a gathering place in both times of national celebration and times of mourning.

The history of the White House begins with an Act of Congress, signed by George Washington in December of 1790, which determined that the seat of government would be settled in the District of Columbia. President Washington worked with Pierre L’Enfant, the city planner, to choose a location for the Presidential residence. James Hoban, an Irish-born architect, was chosen to design the home, having produced the best proposal. 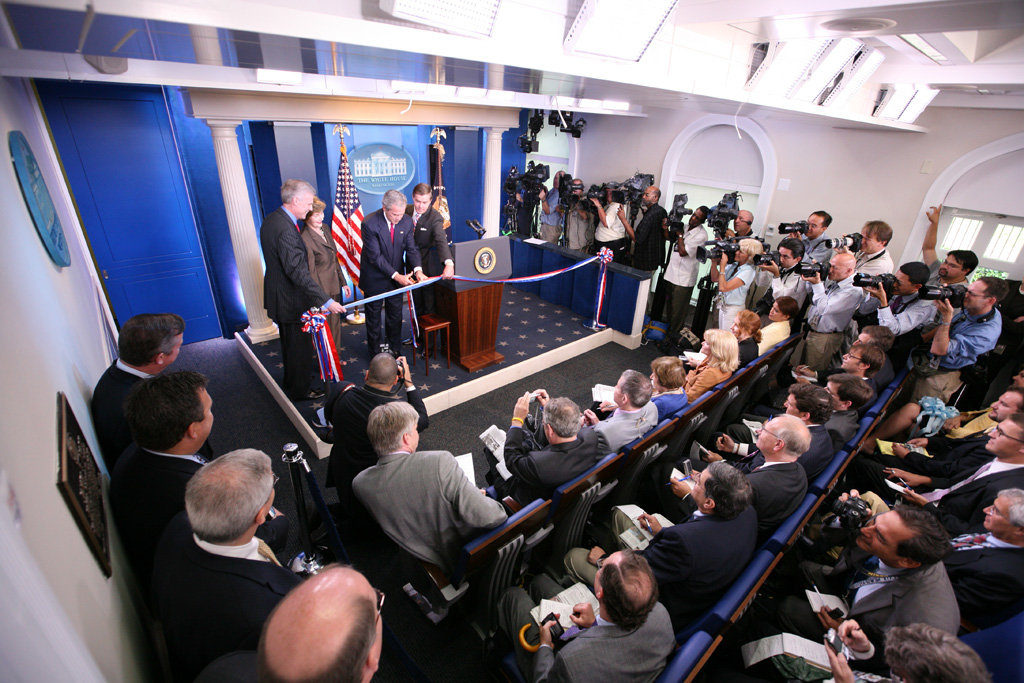 The cornerstone was laid in October of 1792 and President Washington oversaw construction. The building took nearly 8 years to complete so President Washington never got the chance to live in the home he had such a large part in producing. Instead, the honor of becoming the first residents went to John and Abigail Adams. Since the Adams, each President and his family have added their touch to this grand home. Following Adams, President Jefferson opened the White House for public tours, a tradition that has remained in practice ever since, except during war time.

Even though the building was completed in 1800, it had to wait a century, under President Theodore Roosevelt, for its name to be formalized as “The White House.” Before then, it was called many other things, including “The President’s House” and “The Executive Mansion.” This name change preceded Roosevelt’s own renovation of the White House, extending the living quarters for his large family.

The White House has also survived two fires, the first set by the British during the War of 1812 and the second in the West Wing during the Hoover Administration. Both of these events triggered repairs and renovations, but the most comprehensive renovation was initiated by President Truman who had the entire structure gutted, rebuilding it for modern use. He also added a balcony to the Yellow Oval Room on the south face of the White House. This initially controversial addition has been used by Presidents to entertain dignitaries and celebrities for the beautiful view it affords. Even with the extensive renovations, the exterior stone walls remain original, standing the test of more than 200 years.

When the Kennedys came to the White House in 1961, First Lady Jacqueline Kennedy was surprised and saddened that so few historic furnishings remained. Instead of focusing on modernizing like the previous renovations, she recognized the importance of the historic character of the White House and embarked on a restoration. She formed a Fine Arts Committee to assist her in acquiring authentic period pieces. Americans rose to the call and donations arrived, including three original chairs from President Monroe’s Oval Room.

Under President George W. Bush, several important renovations to the White House were completed. In 2006 and 2007, the James S. Brady Press Briefing Room and the White House Situation Room were renovated and modernized. The George W. Bush Presidential Library and Museum is now home to the original Situation Room, which is used as a classroom to help educate and inspire future leaders.

About the Gardens and Grounds 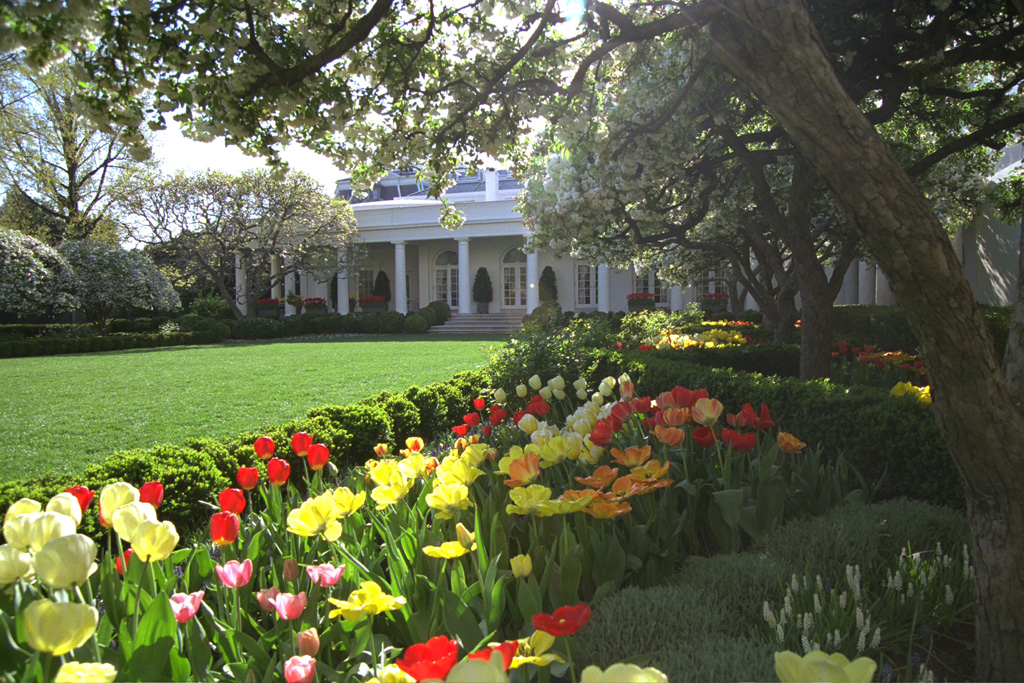 President Washington did not just plan construction of the building, but also recognized the importance of the gardens surrounding the residence and proceeded to buy the land that would become the south lawn. This lawn has been used for all types of events since, and is currently where the President welcomes Heads of State.

It was President Adams, the first resident, who was able to plan the first garden. Since then, Presidents and First Ladies have worked to cultivate gardens fit for welcoming Heads of State and for Presidential speeches to the Nation.

Thomas Jefferson redesigned the gardens and was the first to plant groves of trees. Though the trees he planted have not survived, his concept did and now the grounds are tree-lined. Many American traditions were started using the grounds. The Easter Egg Roll, originally conducted on the Capitol grounds, was moved to the South Lawn by Rutherford B. Hayes in 1878. In 2001, President Bush launched Tee Ball on the South Lawn to encourage fitness among America’s youth and promote our national pastime to people of all ages.

In 1935, President Franklin Roosevelt commissioned the famous architect Frederick Law Olmsted, Jr. to redesign the gardens, and this layout remains the framework for the grounds today. President Kennedy had the Rose Garden, conveniently located just outside the West Wing, redesigned so as to be able to hold public events. Since then, Presidents have continued to use this beautiful space to hold events and give important speeches. The George W. Bush Presidential Library and Museum pays tribute to the importance of the Rose Garden through a recreation that can be enjoyed during a visit to the museum.