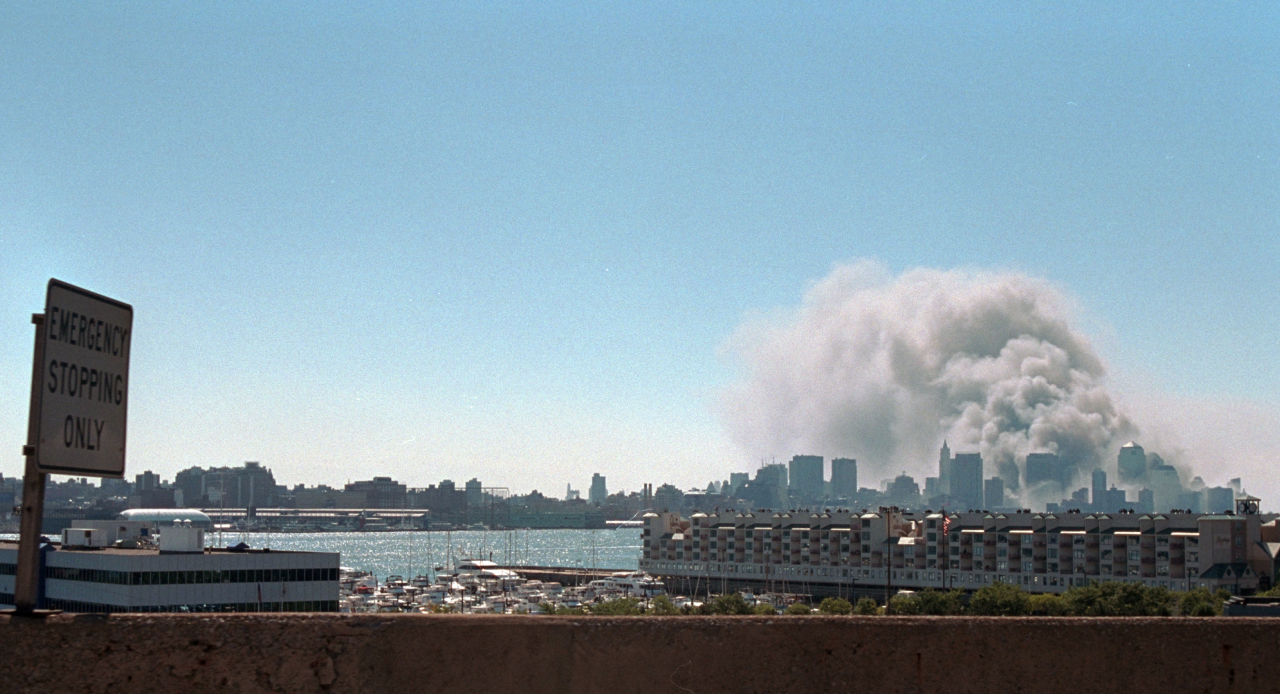 The 9/11 terrorist attacks killed 2,977 people and changed the world as we knew it.  President George W. Bush led the national response in the uncertain days after the attacks, comforted a grieving nation, and demonstrated to the world the strength of American resolve.

On September 11, 2001, the world watched as two jetliners slammed into New York City’s World Trade Center while another crashed into the Pentagon in Arlington, Virginia. Passengers onboard a fourth airplane averted even more destruction by trying to regain control of their airplane, which was intended to hit either the White House or U.S. Capitol. As a result, the hijackers crashed it in a field outside of Shanksville, Pennsylvania.

That morning, President George W. Bush was focused on an important part of his domestic agenda: education. 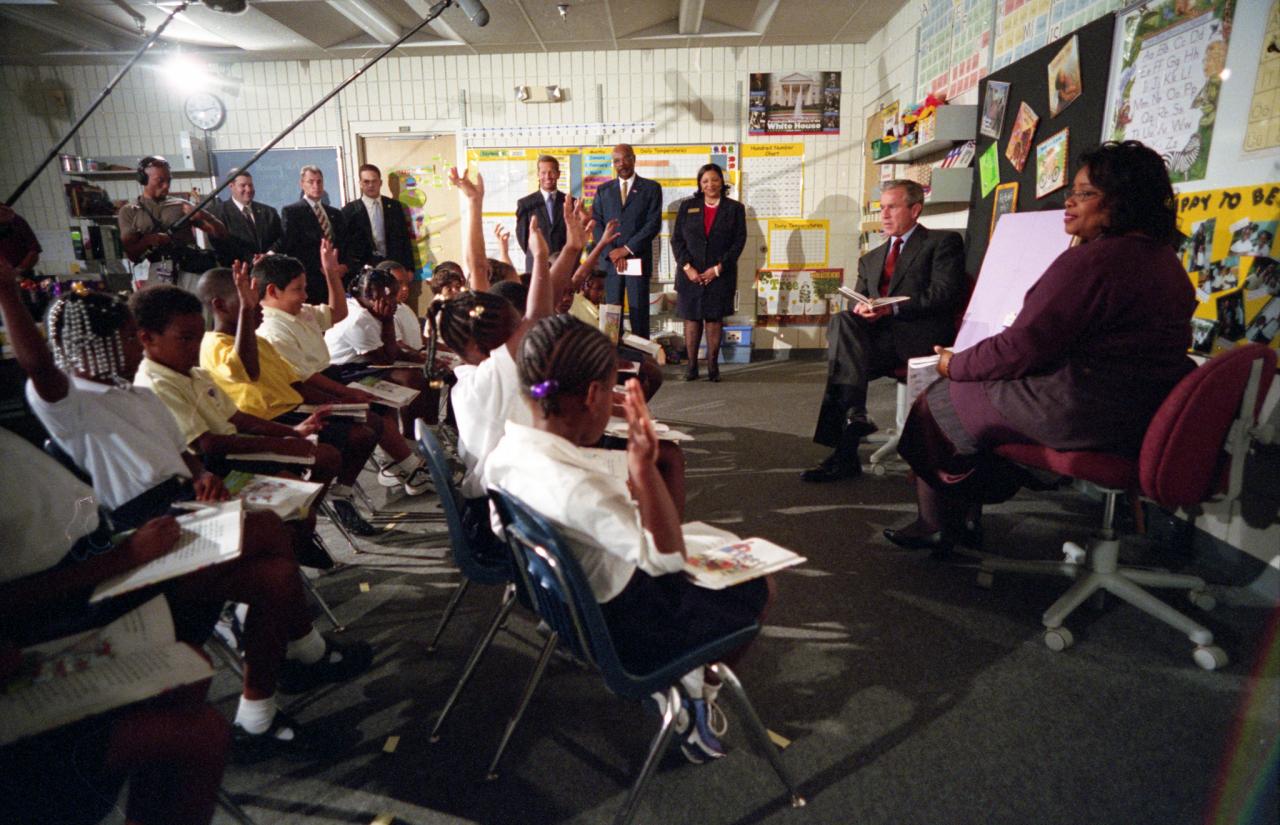 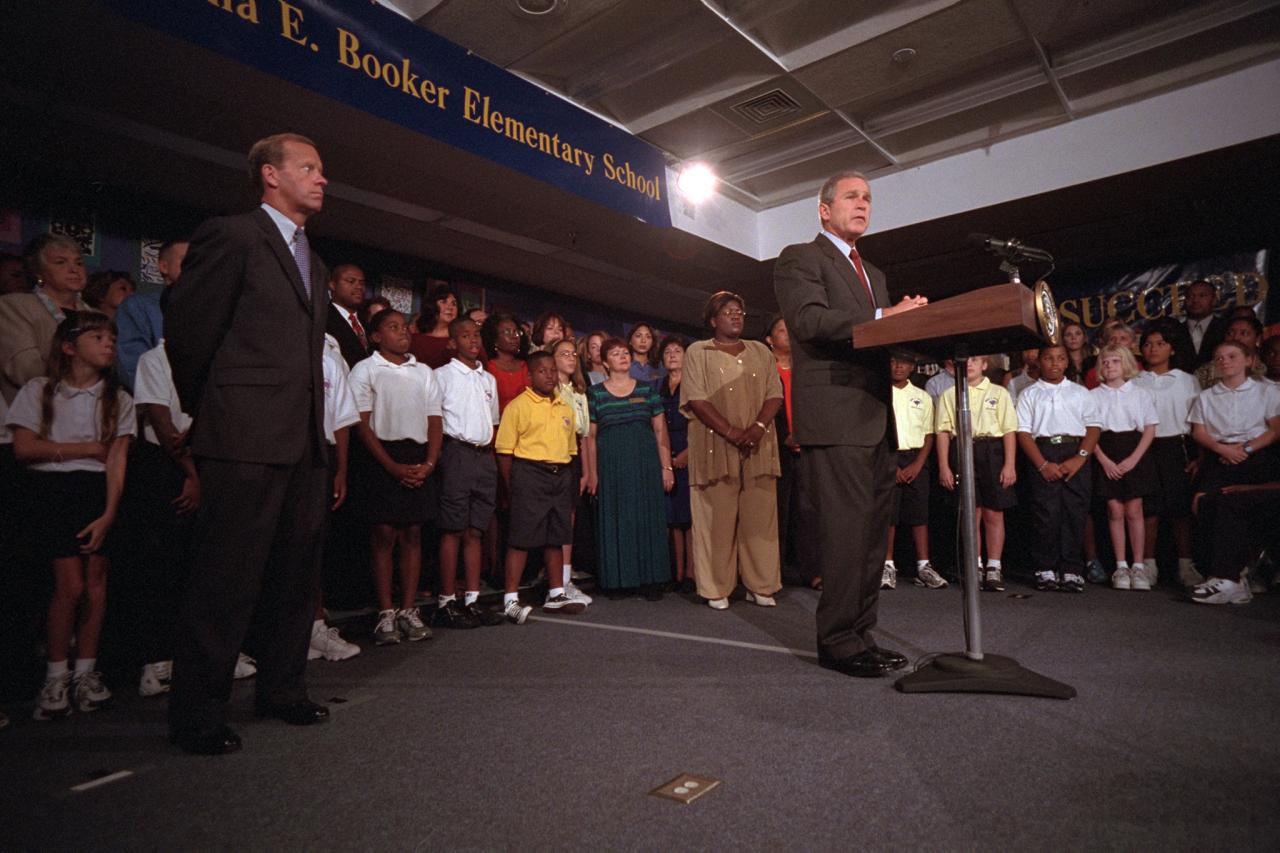 While listening to second graders complete a reading lesson, President Bush was informed: “America is under attack.” Trying not to alarm the children, President Bush listened to the rest of the lesson then went to another classroom to assess the situation. He then addressed the country. 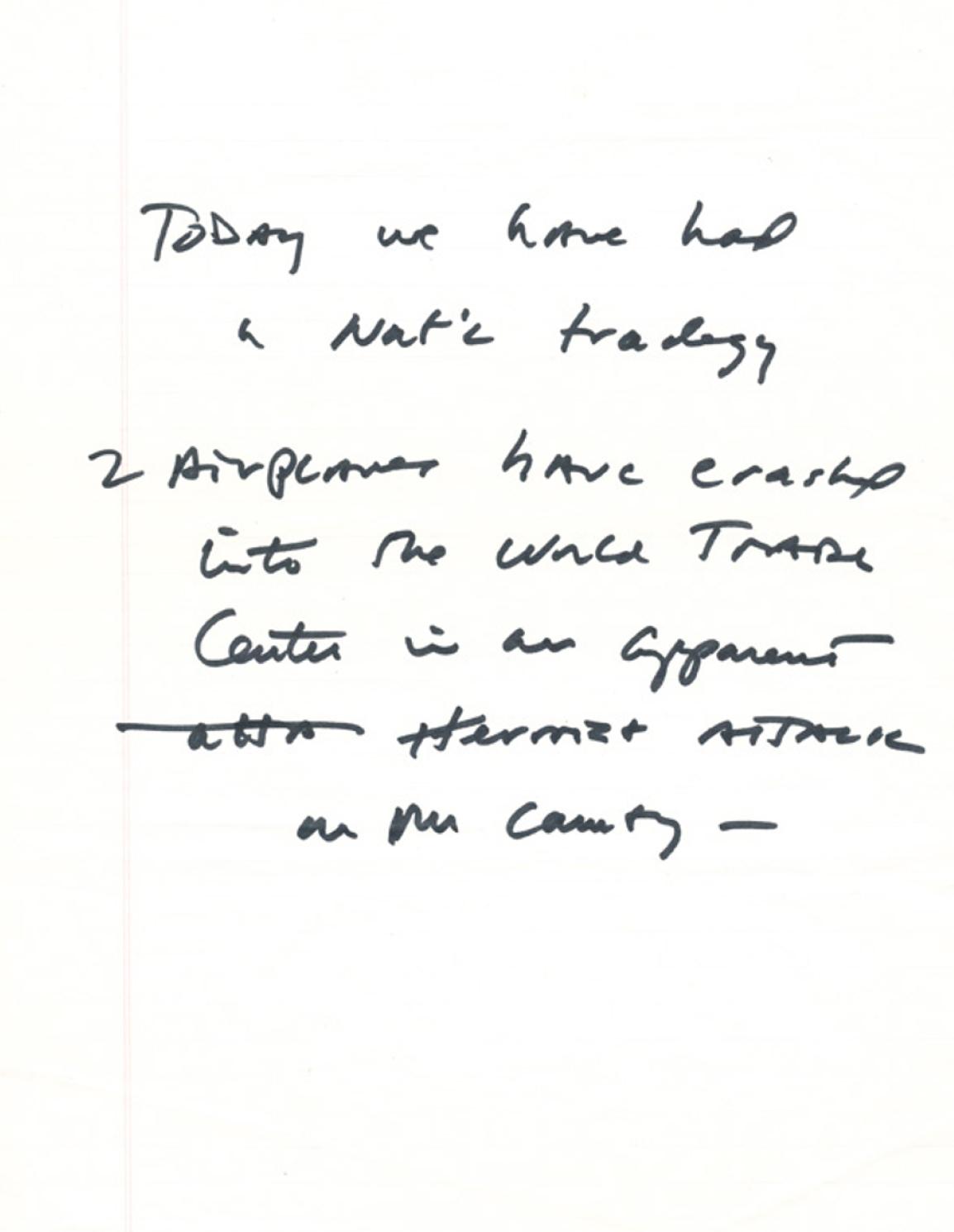 Notes written by President George W. Bush for the initial statement to the press after the terrorist attacks on September 11, 2001. (3 Page Document; 1 of 3). George W. Bush Presidential Library and Museum. ( P7058-31A).
View in the National Archives Catalog 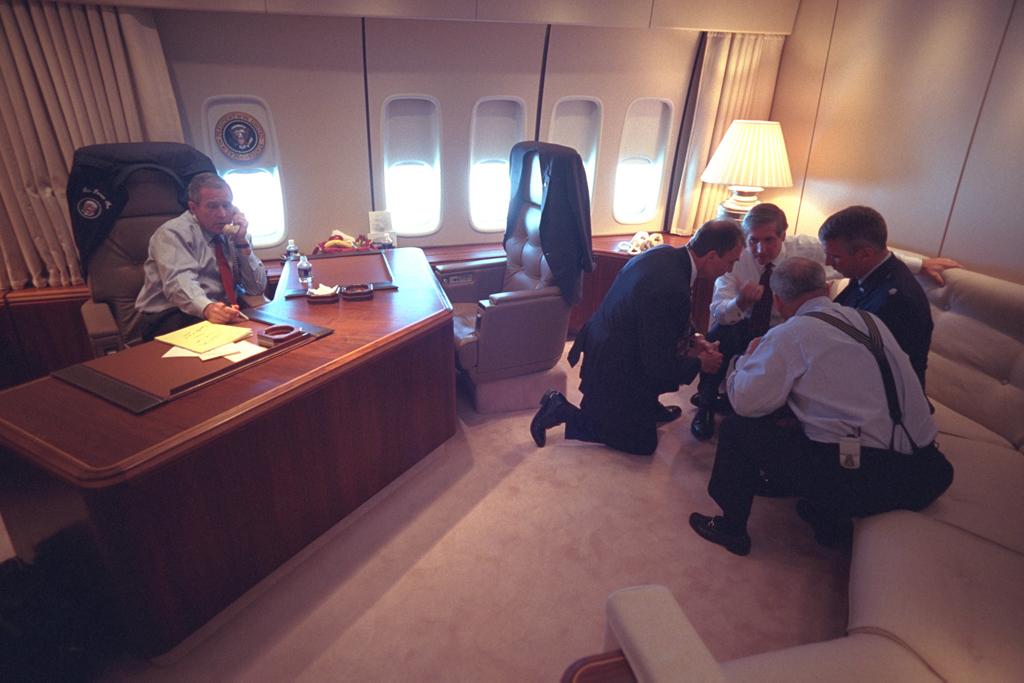 Air Force One landed at two military bases, where President Bush received intelligence, coordinated a national response, and addressed the nation. "Make no mistake: The United States will hunt down and punish those responsible for these cowardly acts," said the President. 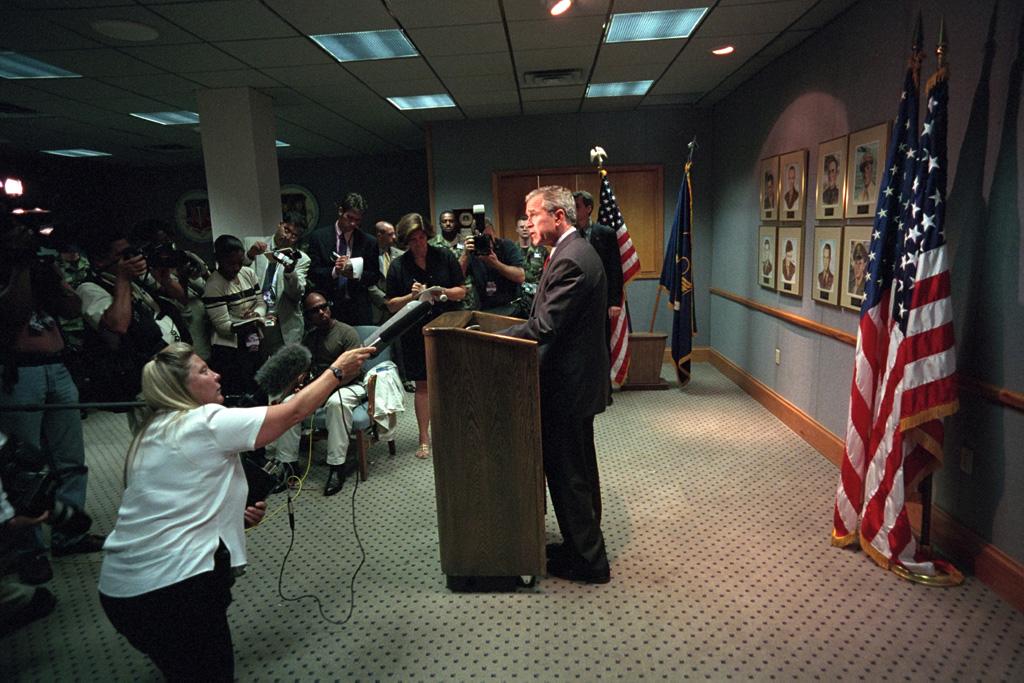 President George W. Bush delivers remarks on the terrorist attacks, September 11, 2001, from Barksdale Air Force Base in Louisiana, before departing for Offutt Air Force Base in Nebraska. (P7078-04)
View in the National Archives Catalog

President Bush was determined to return to the White House, so Air Force One flew back to Washington, DC.  President Bush met with his senior staff and then addressed a frightened nation from the Oval Office.

In the days following September 11th, President Bush assessed the damage in Washington and New York, directed military and civilian response efforts, acknowledged the work of first responders, and comforted a grieving nation. 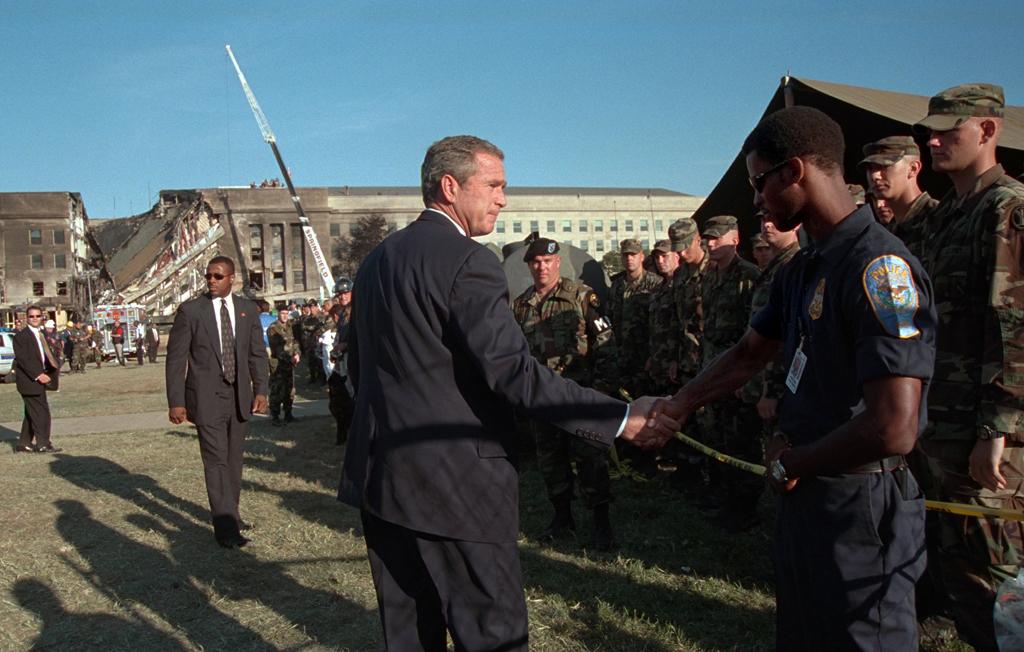 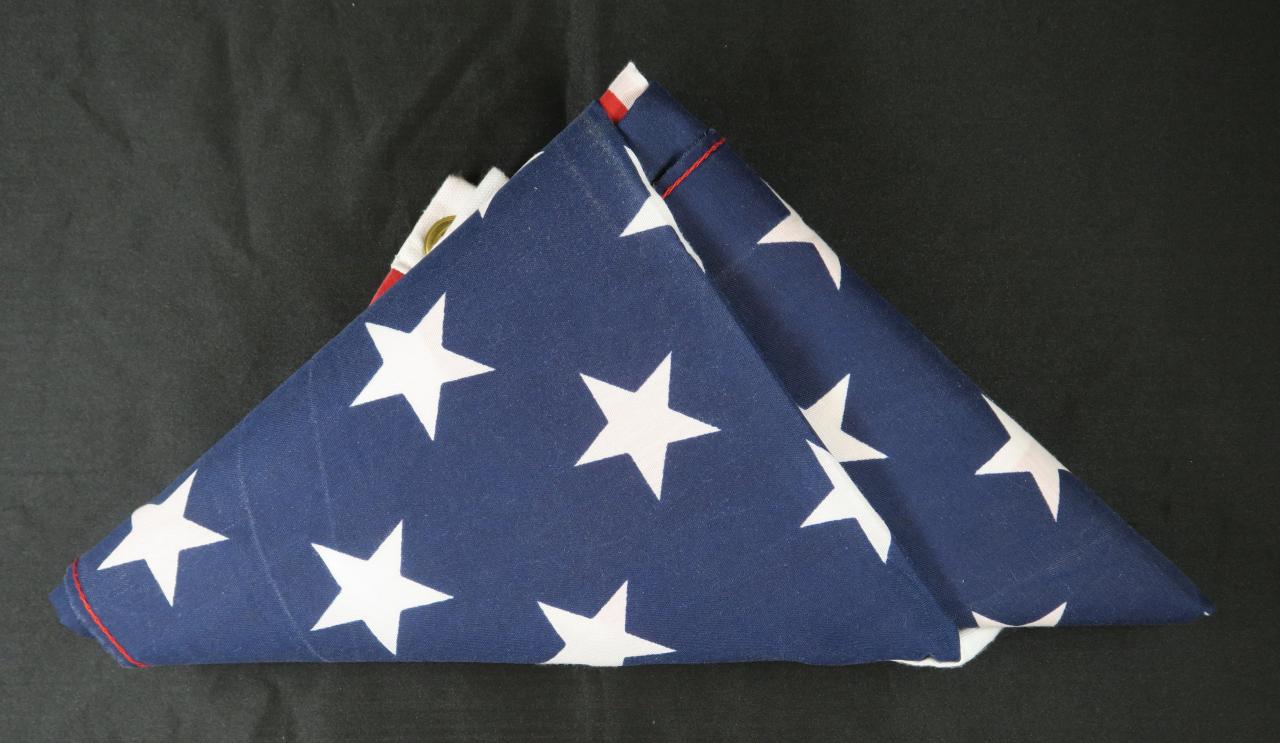 From our artifact collection: United States flag that flew on the Healing Field Memorial at the September 11, 2008 dedication of the Pentagon 911 Memorial.

Tapping on the desk hewn from the timbers of the H.M.S. Resolute, President George W. Bush makes the stand in the Oval Office, September 13, 2001. "Make no mistake about it, my resolve is steady and strong about winning this war that has been declared on America." 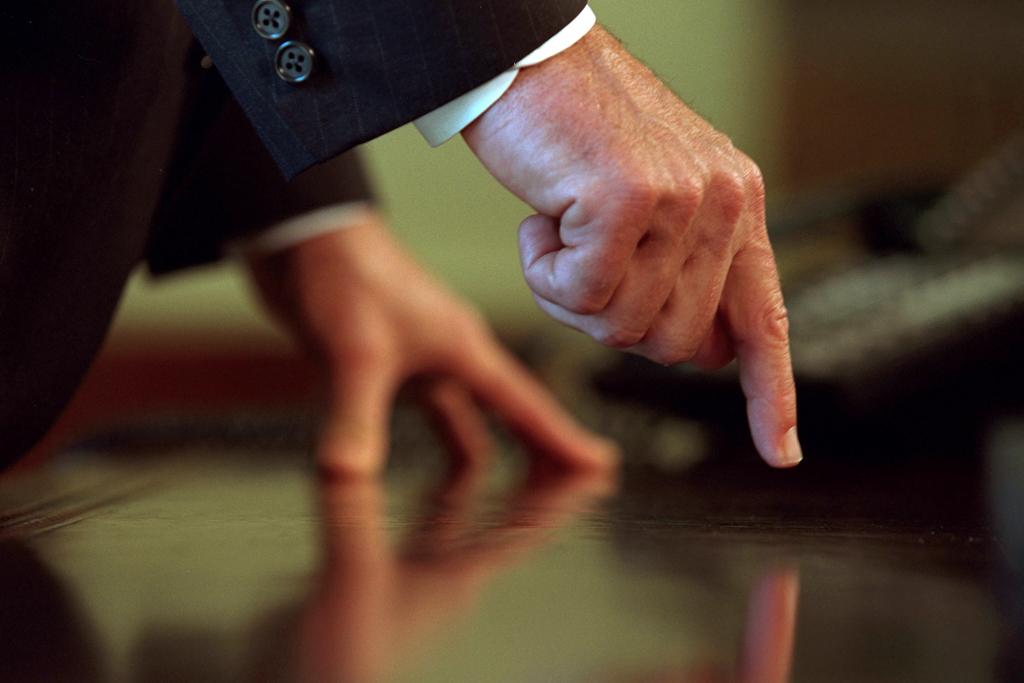 President George W. Bush taps on the desk made from the timbers of the H.M.S. Resolute during his speech from the Oval Office, September 13, 2001. (P7280-23)
View in the National Archives Catalog 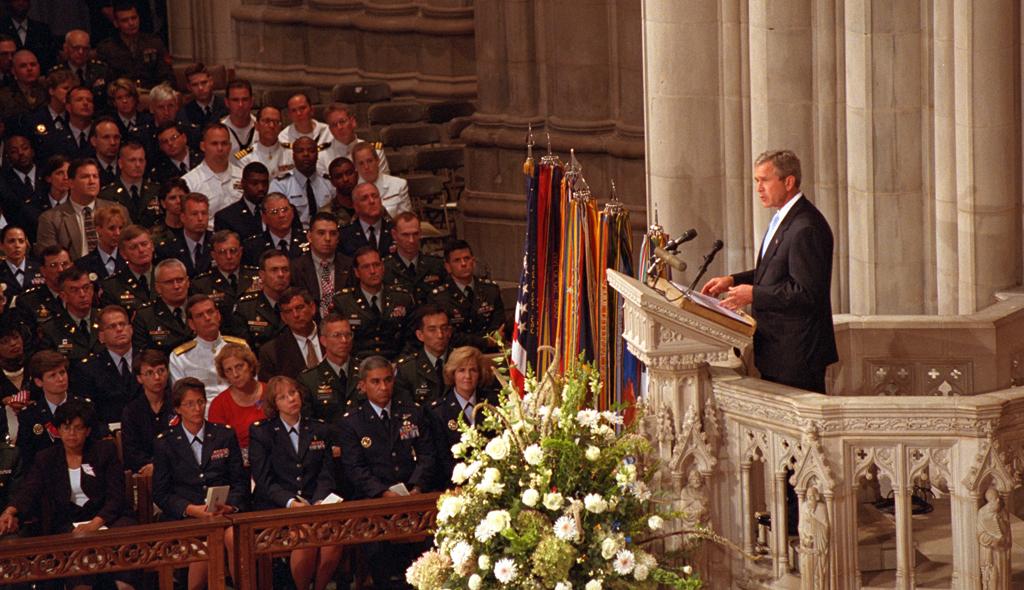 During the newly proclaimed National Day of Prayer and Remembrance, President George W. Bush addresses the congregation and the nation, September 14, 2001, at the National Cathedral in Washington, D.C. (P7347-15)
View in the National Archives Catalog

President George W. Bush was joined at the National Cathedral by former Presidents Ford, Carter, Bush, and Clinton for the National Day of Prayer and Remembrance on September 14, 2001. Members of Congress, the Cabinet, the Washington diplomatic community, and prominent religious leaders were also in attendance. 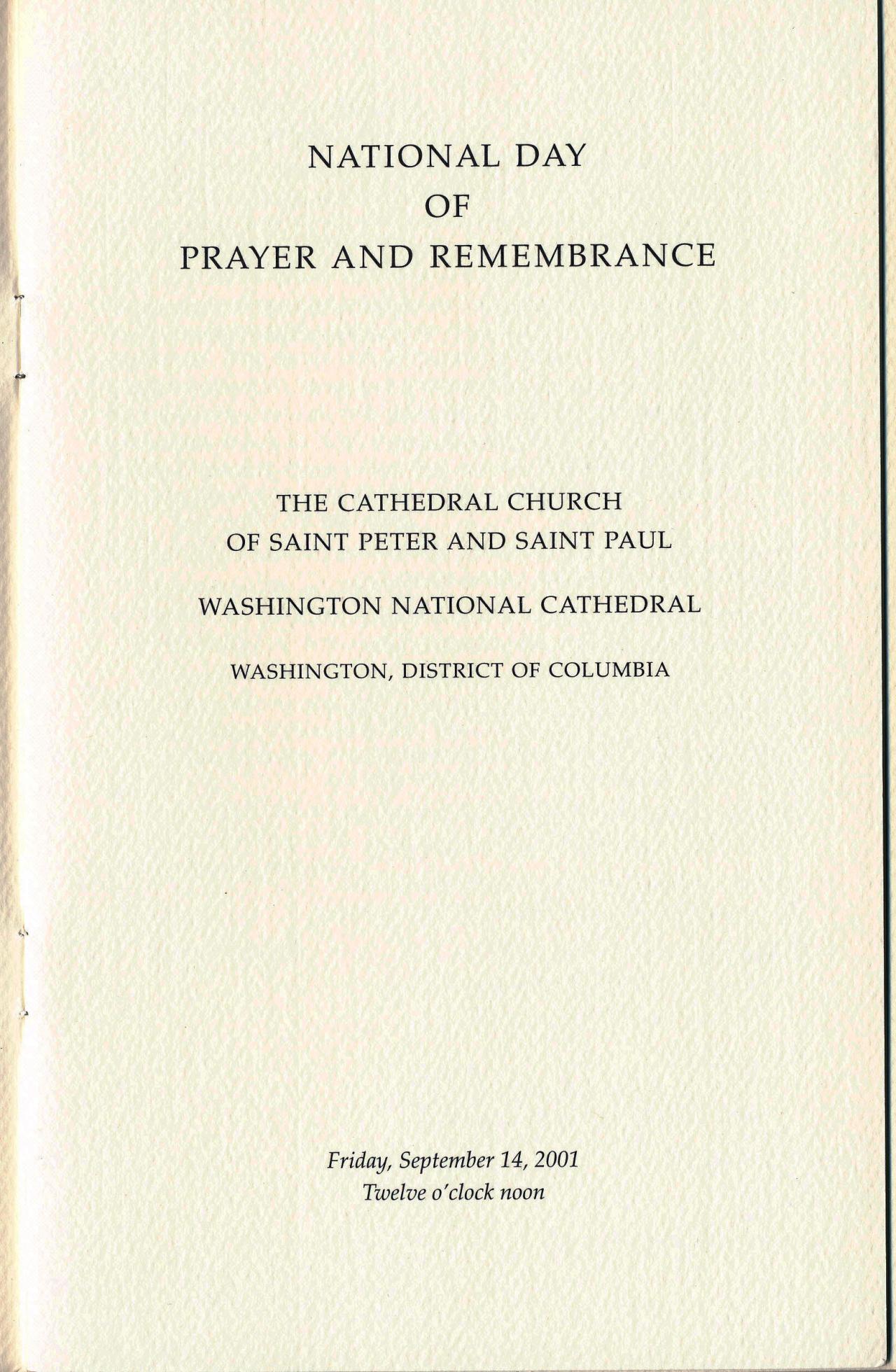 Program from the National Day of Prayer and Remembrance service held at the Washington National Cathedral on September 14, 2001.

When President George W. Bush first visited New York City three days after the attacks, he was astonished by the horror of the scene: “As we approached Ground Zero, I felt like I was entering a nightmare. There was little light. Smoke hung in the air mixed with suspended particles of debris, creating an eerie gray curtain…They had hit us harder than I comprehended.” (Decision Points, p. 148)

Standing atop a crumpled fire truck with retired New York City fireman Bob Beckwith on September 14, 2001, President Bush rallies rescue workers during an impromptu speech at Ground Zero saying, "I can hear you. The rest of the world hears you. And the people who knocked these buildings down will hear all of us soon." 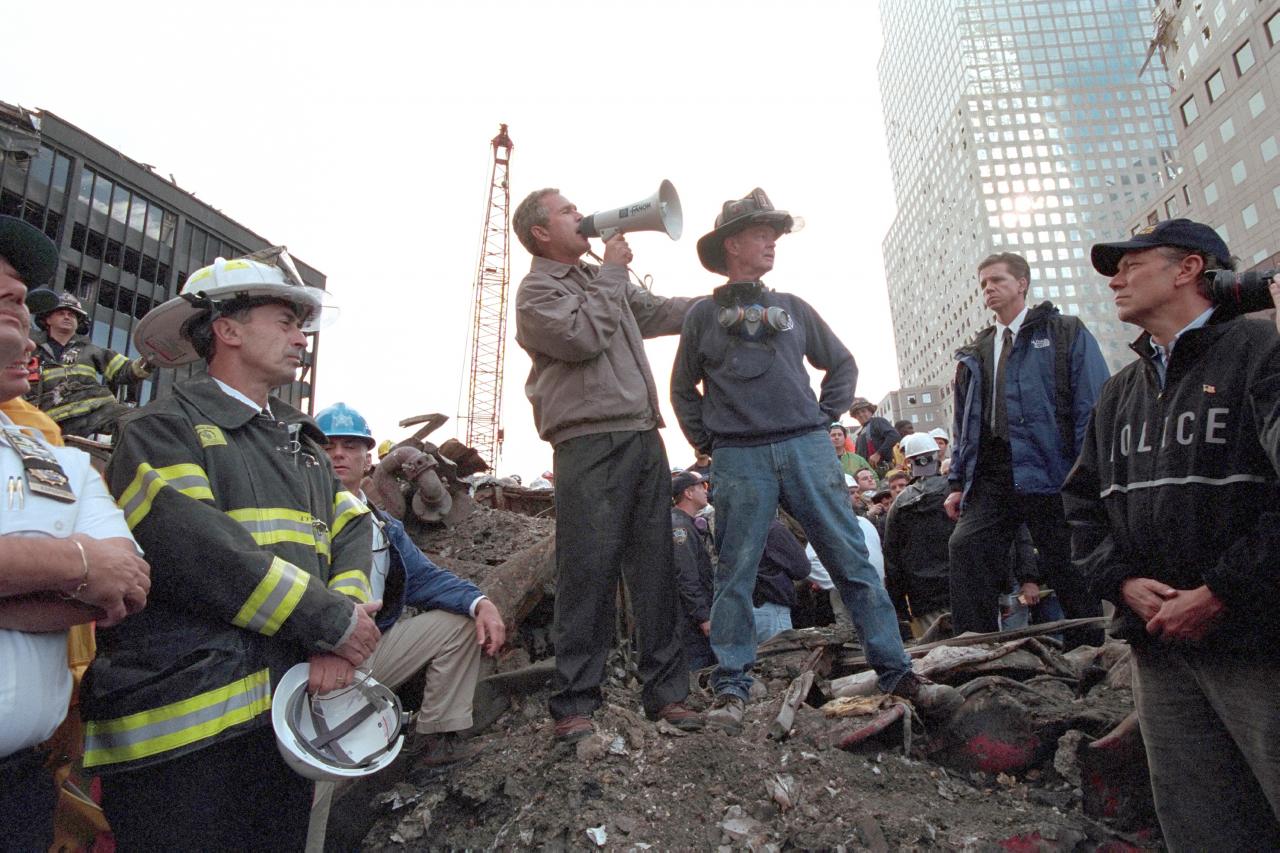 From our artifact collection: The Fanon MP-5 bullhorn President George W. Bush used to speak to the first responders working at Ground Zero when he visited New York City on September 14, 2001. DO.203303 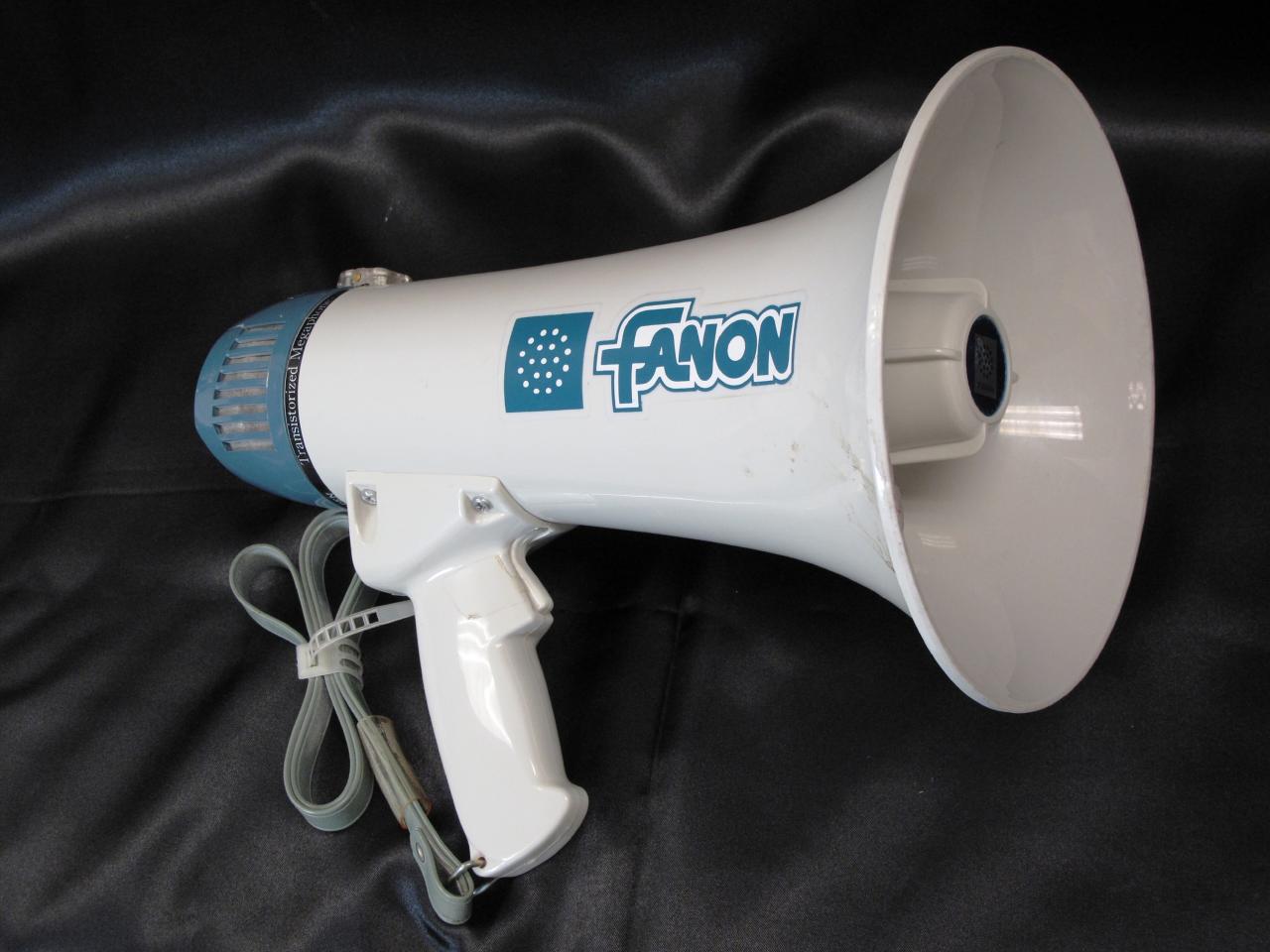 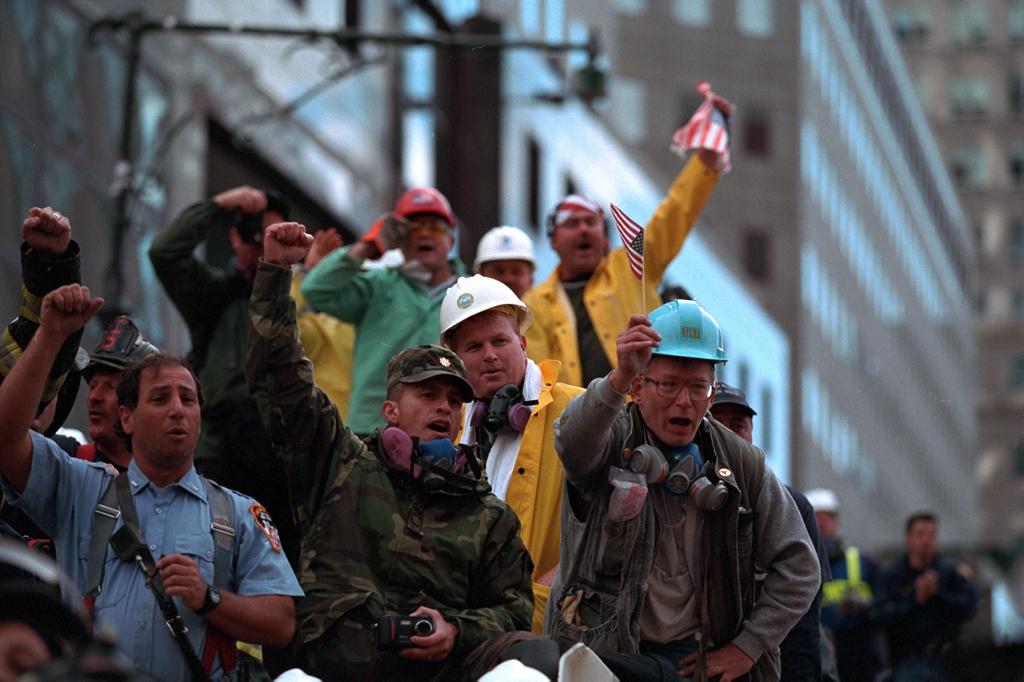 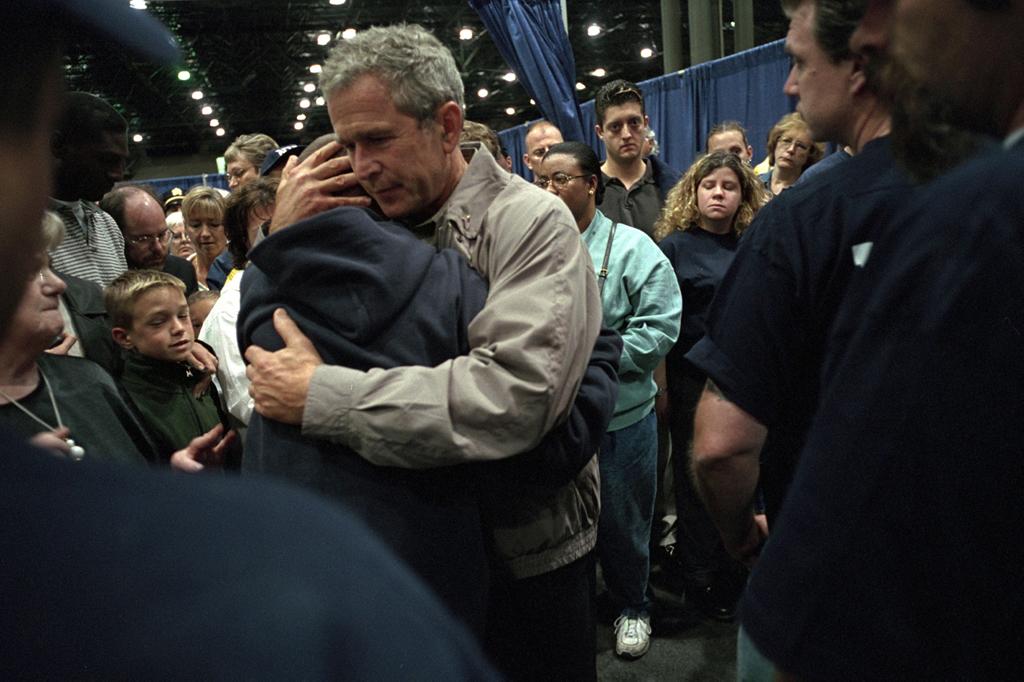 As the nation moved from shock to anger in the days after 9/11, President Bush emphasized that the attacks were conducted by extremist terrorists, and did not represent the Islamic religion. 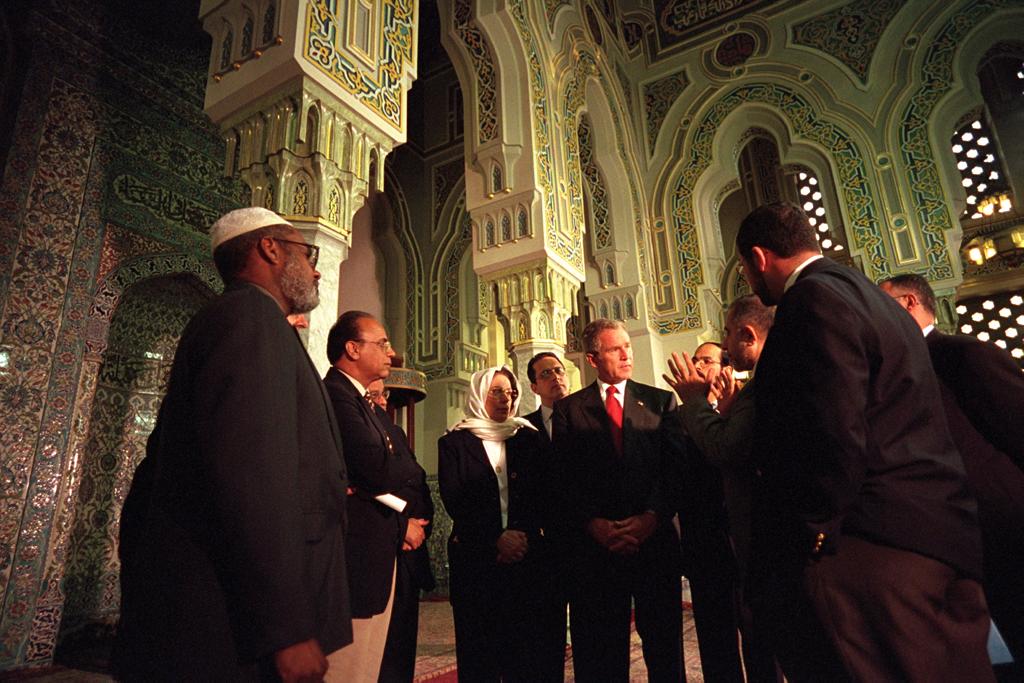 Calls from world leaders offering support came in within hours of the attacks, and gifts and messages of condolence from people around the world (especially schoolchildren) poured in the following days and weeks. 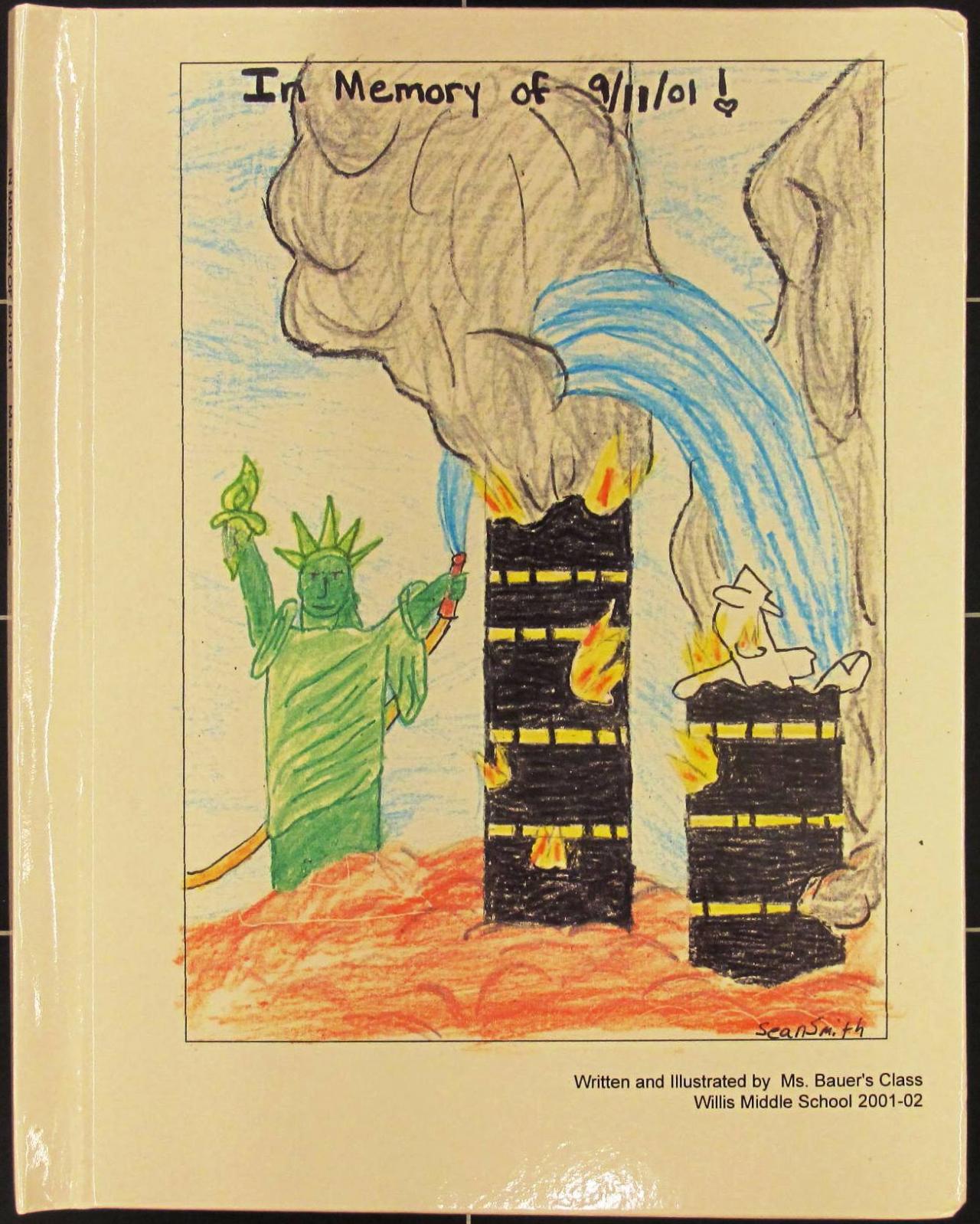 From our artifact collection: Homemade card, two pieces of white poster board taped together. Front has color printed Scotland and US flags on crossed poles drawn in black marker against field of red cardstock glued to poster board. Inside has several signatures and messages of condolence from the "Safe Til Six" After School Club, The Salvation Army, Falkirk, Scotland. 2019.28.91 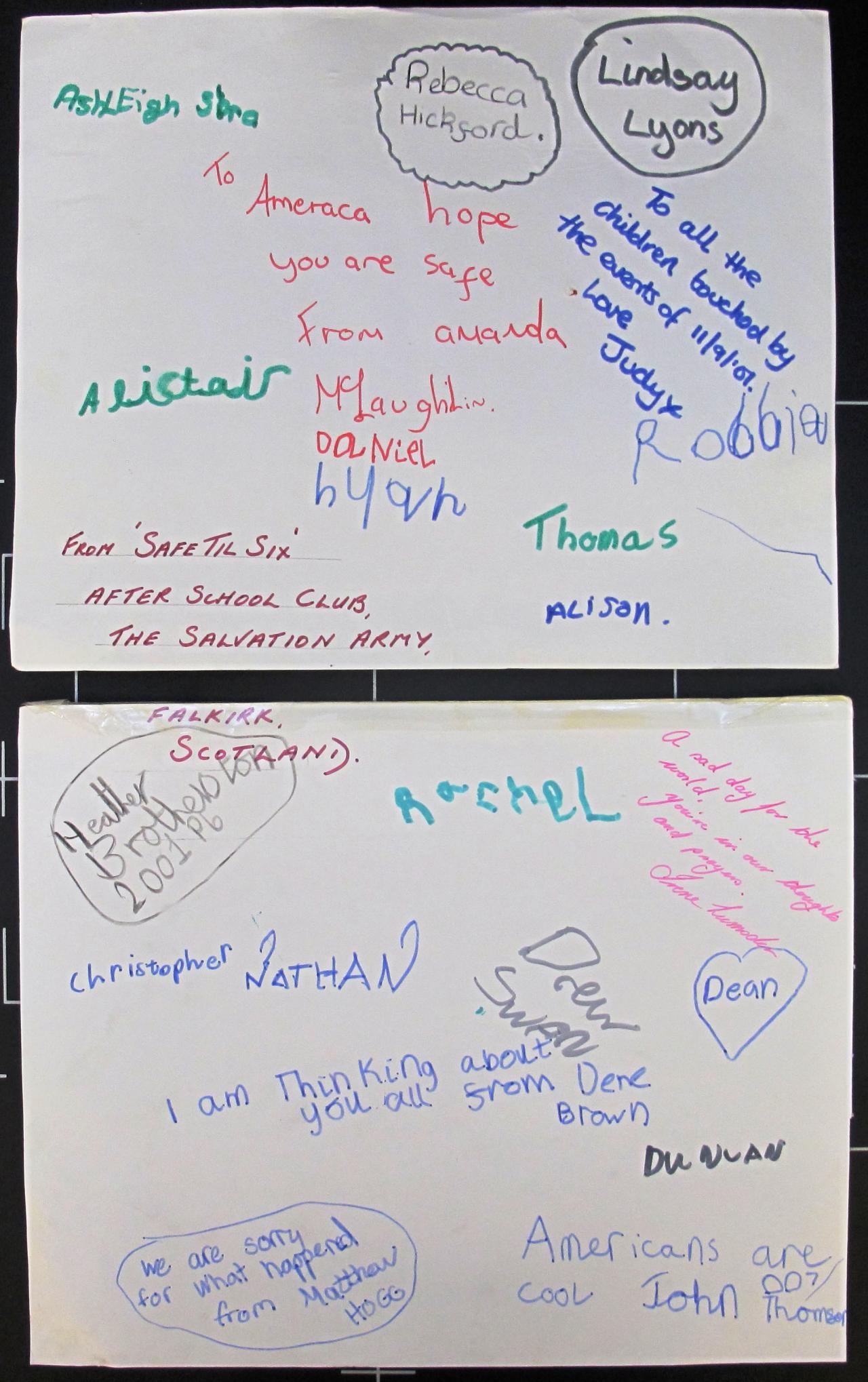 On September 20, 2001, President Bush addressed a joint session of Congress, the nation, and the world, saying “In the normal course of events, presidents come to this chamber to report on the state of the union. Tonight, no such report is needed; it has already been delivered by the American people...My fellow citizens, for the last nine days, the entire world has seen for itself the state of union, and it is strong.”

"...I will carry this," said President Bush during a joint session of Congress, September 20, 2001. "It is the police shield of a man named George Howard, who died at the World Trade Center trying to save others. ...This is my reminder of lives that ended, and a task that does not end." 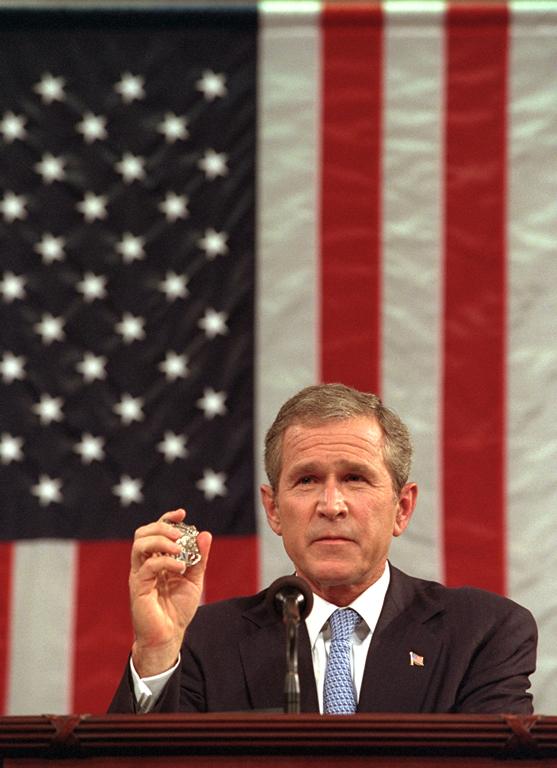 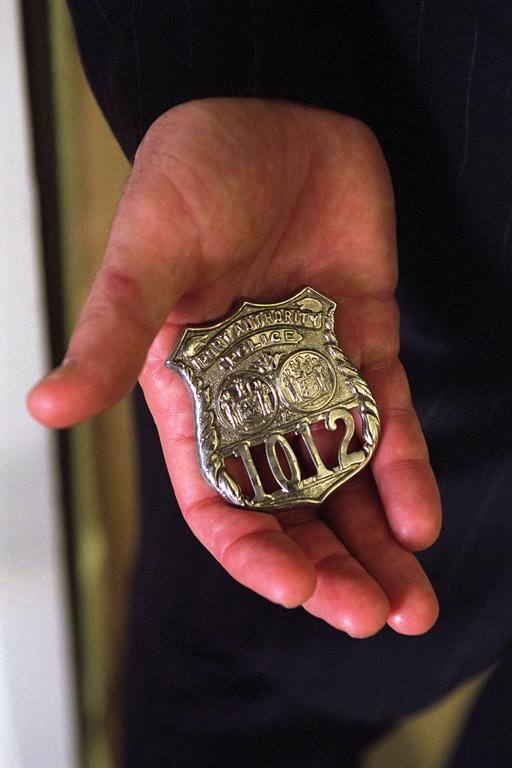 Standing in the Oval Office, October 15, 2001, President George W. Bush holds the badge of a police officer killed in the September attacks. (P8576-12a)
View in the National Archives Catalog

In the days that followed the attacks, President Bush encouraged Americans to go back to work, and to defeat terrorism by resuming their lives.  The next month, 55,820 baseball fans packed New York City’s Yankee Stadium to watch their hometown team play the Arizona Diamondbacks in the World Series.  President Bush took to the mound to throw the first pitch.  It was a strike. 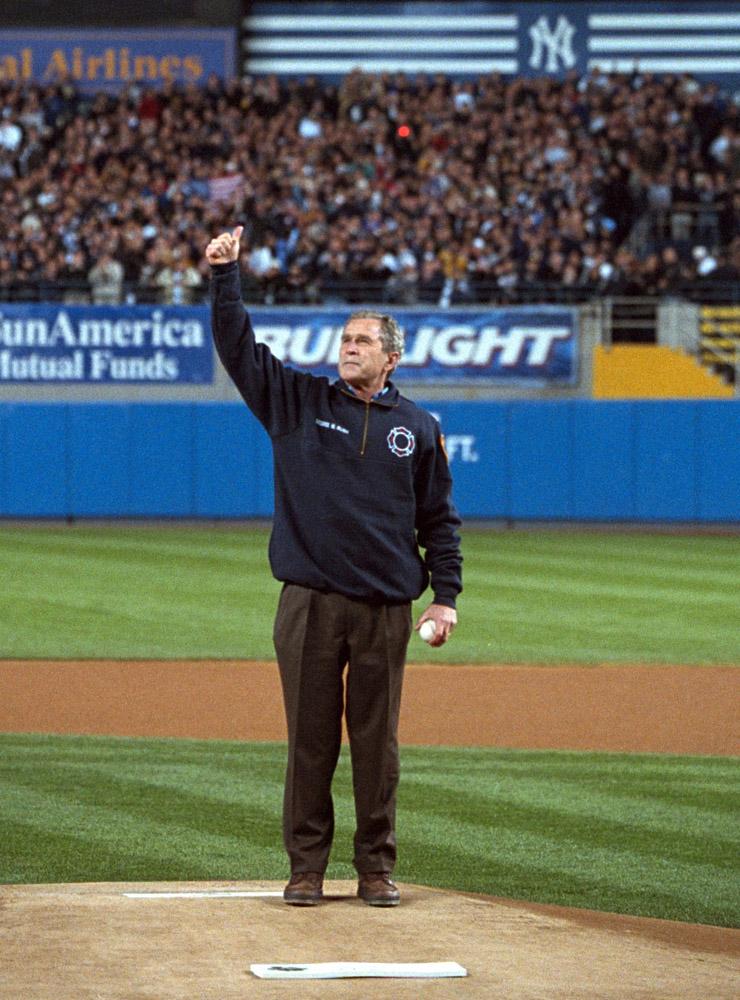 President George W. Bush gives a thumbs-up, October 30, 2001, as he stands on the mound at Yankee Stadium before throwing out the ceremonial first pitch in Game Three of the World Series. (P9154-07)
View in the National Archives Catalog

Despite the tragic loss of life and destruction, the nation grew in strength and unity. More than a decade after the terrorist attacks, the effects of September 11th have been complex and far-reaching; however, President Bush’s words from that evening’s Oval Office address hold true: “Terrorist attacks can shake the foundations of our biggest buildings, but they cannot touch the foundation of America. These acts shattered steel, but they cannot dent the steel of American resolve.”

From our artifact collection: Stainless steel "Hearts of Steel," bracelet engraved "Let's Roll/ We Remember 9-11-01 United We Stand/ USA." DO.358192

The George W. Bush Presidential Library and Museum has more resources on the terrorist attacks against the United States on September 11, 2001.