Through artifacts, documents, audiovisual, and interactive components visitors experience many facets of President Bush’s time in the White House, including the campaign and the 2000 election, key legislative moments from the presidency, and compassionate policy initiatives enacted during his Administration.

From the beginning, it was decided the galleries should not be a strictly chronological history of the administration, but instead focus on how the key ideas or principles of freedom, responsibility, opportunity, and compassion were put into practice by the President and Mrs. Bush. Almost every section of the gallery has an interactive component of some type, encouraging visitors to explore and gather more information.

The Library and Museum hosts Special Exhibits and various events throughout the year. The annual holiday exhibit, recreating Bush Family Christmases in the White House, has become a North Texas tradition.

Gifts to the President

Additionally, the Library maintains approximately 43,000 artifacts, primarily foreign and domestic gifts given to the President and Mrs. Bush, and other items obtained throughout the presidency at events and during trips. Most famously, perhaps, the Library has the bullhorn used by President Bush during his visit to the World Trade Center after the terrorist attacks of September 11, 2001. These artifacts document the American experience and are used extensively in the Library’s permanent and special exhibits.

When a President accepts a gift from a foreign Head of State, it becomes the property of the American people, as the President works on our behalf.

To learn more about the Archives check out the Research section.

To learn more about the facility - location, building facts, and construction - visit The Facility section. 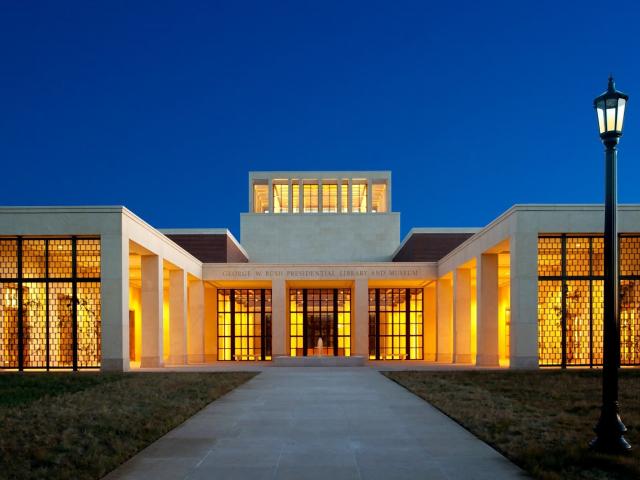 The George W. Bush Presidential Library and Museum is the 13th presidential library administered by the National Archives and Records Administration.
Return to top